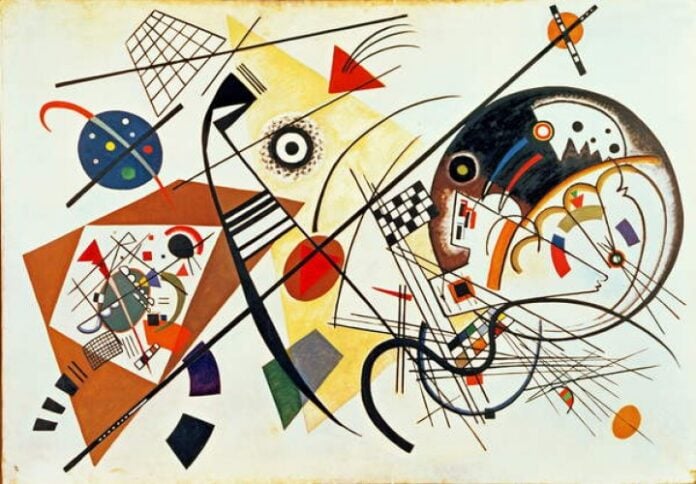 “A painter, who finds no satisfaction in mere representation, however artistic, in his longing to express his inner life, cannot but envy the ease with which music, the most non-material of the arts today, achieves this end. He naturally seeks to apply the methods of music to his art.”

These are words from the renowned painter Wassily Kandinsky that describe the influence of music on his work throughout his life – music appears everywhere in his paintings. Kandinsky believed that music could be brought to the canvas in the way it can be brought to paper in the form of notes and ultimately to melodious sound that captures almost any living being.

“The sound of colors is so definite that it would be hard to find anyone who would express bright yellow with base notes or dark lake with the treble.”

Another one of Wassily Kandinsky’s famous quotes that show us to a large extent where the artist got his inspiration. However, he was not the first to do this. The Pythagoreans were probably the first to blur the boundaries between the musical and the visual when they claimed that, “the eyes are made for astronomy, the ears for harmony, and these are sister sciences.”

Kandinsky continues to perfect his theory: Abstract art creates a new inner world that, when viewed from the outside, has nothing to do with reality. It follows the general laws of the cosmic world. Kandinsky did not doubt his ‘inner world’ throughout his life from the very early ages until his death.

The sophistication and amalgamation of music and painted or written art became ever more prevalent as human artistry and creativity developed over time. If you take a moment to study this phenomenon, you will encounter famous names like Johann Wolfgang Goethe who once declared that architecture was “frozen music” or as Paul Klee famously once said, “One day I must be able to improvise freely on the keyboard of colors: the row of watercolors in my paintbox”.

And like Paul Klee, who drew great inspiration from music in his art, as can be seen reflected in the name of one of his paintings: Harmony in Blue-Orange, 1923, the impact of sound can be perceived everywhere in Wassily Kandinsky’s work.

However, before understanding the art, we must first understand the man. Who was Wassily Kandinsky and why did music play such a pivotal role in his life? The Russian painter, Wassily Kandinsky, is famous as one of the pioneers of abstract painting and abstract expressionism. Through his pictures and theoretical works, he exerted a significant influence on the development of modern art.

Kandinsky was born in Moscow in the year 1866. In his early years, he learned to play piano and cello. Music would later play a significant role in his art throughout his life. He studied economic policy in Moscow and worked there as a lecturer at the university.

After visiting a French impressionist art exhibition in 1895, Wassily Kandinsky decided to become a painter. He moved to Munich and learned the basic techniques of painting. He studied the impressionist style as well as the Art Nouveau style. Notably, he dealt with the works of Franz von Stuck.

“Without expression and boring!”

Kandinsky painted his first pictures in the impressionistic style, but soon his painting style changed to the abstract. His interest in “fantastic motifs” is clearly expressed in his paintings during this time. However, Kandinsky is increasingly dissatisfied with the style and expression during his time in Munich. To an effect, they have an expressionless and dull impact on him.

Between 1900 and 1910 Kandinsky undertook extensive travels. Among other things, he visited Paris, where he came into contact with the French artist Paul Gauguin. Through him, he became acquainted with neo-expressionism and Fauvism. He traveled to Germany and founded the artist group Phalanx where he met the expressionist artist Gabriele Muenter whom he married a short time later. This marriage lasted until 1916.

However, it was in Vienna where Kandinsky developed his most unique friendship with the composer Arnold Schoenberg. When he heard one of his concerts, Kandinsky discovered that he had encountered a brother-in-arms. Promptly, the two men departed on a long and often highly critical friendship that would break the barriers between music and painting.

Kandinsky along with Schoenberg associatively linked pictorial sequences and consciously sought to place the elements of color-form, text, space-sound, and movement on an equal level. This equality of the different parameters shows that these stage works are not dramas in the usual sense. They limit themselves to lyrical passages. Therefore, the word is used in places as pure sound. At the same time, in Schoenberg’s libretti, they emancipated color against sound – Colors, shapes, and sounds were in the foreground and, like language, freed from the compulsion to imitate reality. And all of this without the benefit of modern lighting.

Kandinsky had to leave Germany at the beginning of the First World War as an enemy alien. Consequently, he returned to Moscow. In the early years of Soviet Russia – as it was then called – he worked in a leading capacity in the People’s Commissariat for Education and built up art schools and museums.

After the war, in 1922, on a business trip to Germany, he accepted an invitation to the adolescent Bauhaus in the Weimar Republic. This was when a second productive period began, which ended with the closure of the Bauhaus in 1933 and his renewed expulsion from Germany.

It is at the Bauhaus where Kandinsky indeed showed the influence of music on his artwork. Interestingly enough, Kandinsky did not actually teach painting during his time there but focused on the analysis of pictorial elements. In his pictures, he paved the way for the representation of elements into composition, as can be seen in his book ‘Point and Line to Plane’ from 1926. He developed his theory in a particular language in which geometrical, physical, aesthetic and spiritual coexisted naturally.

A Visual Image of ‘Colorful Sound’

This is beautifully depicted in Wassily Kandinsky’s ‘Yellow-Red-Blue,’ 1925 / oil on canvas; 128 x 201.5cm, on display at the Musée National d’Art Moderne, Paris.

The image can be divided into two areas: light to dark colors move from left to right, fusing into strongly delineated color areas. Yellow tones dominate the left area. The central focus is the rectangle in the slightly clouded lemon yellow. Adjacent orange, ocher and brown shades form the transition to the darker area of the canvas. The transparent violet structure is reminiscent of a crescent moon and forms the color transition to the blue circle that is darkened mainly with black.

In the darker color range of the picture, there are also larger black shapes: black circle, black stick with four flags, two strokes with three passing bows and lure-like formations.

A gray square stands between these different color worlds. Seemingly indiscriminately, a checkerboard-patterned quadrangle stands out from the gray square. Yellow-gray clouds embed all graphic objects in the right half of the picture and a violet-white cloud band at the bottom of the image. On the left and top of, you can see violet-white and dirty yellow clouds. The rest of the painting is filled with bright sky blue. Above a yellow-black rimmed gray sun, the sky seems to extend beyond the edge of the picture.

Kandinsky literally brings the colors and their associated forms to life. They act like autonomous creatures and even experience emotions. His conception of the abstract in fine art is not comparable to other works of abstract artists. A unique movement, depth, and dimension characterize Wassily Kandinsky’s abstract representations. His abstract style has influenced countless artists over the years.

A final phase of work begun in Paris

During his time in Paris Kandinsky changed his painting style. The artist no longer used a combination of primary colors – his pictures become brighter – a reflex to the ‘soft light,’ as he called it, showing biomorphic forms, in contrast to the geometrically rigorous images of the Dessau Bauhaus era. Composition IX, painted in 1936, is a good example of this.

Kandinsky referred to this period of his work as the ‘fairy tale themes’.

Due to lack of materials during the Second World War, the size of his artwork became smaller, so much so that he was forced to work with gouache on cardboard. And again the public and his colleagues rejected his art. It was the world of figures, in which abstraction was not an end in itself and the language of forms was not ‘stillborn’ as he put it, but rising out with richness and vitality.

Wassily Kandinsky kept true to his form until he died in 1944, three days before his 78th birthday. There is hardly an artist of the 20th century who has such a presence as Wassily Kandinsky – his art is ageless and transcends from and into the realms of the musical.

An Introduction to the Life and Times of Laura Riding