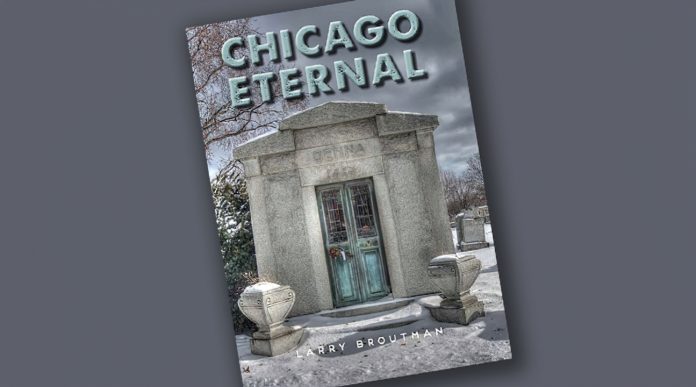 With your newest photography book, “Chicago Eternal”, the city’s rich history springs to life through illuminating photographs of gravestones and monuments. The full-color, hardcover book explores over thirty Chicago area cemeteries, shedding light on the famous, notorious, and long-forgotten. Have you always been interested in cemeteries or is this a new fascination for you?

Larry Broutman: A cemetery is a history lesson combined with an art gallery, and it is open to the public. Yet few take advantage of all that a visit to their local graveyard can offer.

My fascination with cemeteries was sparked when I was working on my previous book of photography, “Chicago Monumental”, an exploration of the Windy City’s public art scene. Through my research of well-known sculptors from the late 1800s to the early 1900s, I discovered that some of their artwork was located in Rosehill and Graceland cemeteries. For example, Daniel Chester French, who designed the Lincoln Memorial, also designed Marshall Field’s monument at Graceland. When I went to the cemeteries four years ago to photograph the sculptures, I was struck by the stunning visual beauty of the monuments and mausoleums, coupled with their interesting historical significance. I knew I had discovered the subject matter for my next book.

As a photographer, I was initially drawn to cemeteries because of the visual richness of their monuments. However, as I did more research, I realized that the stories of the people behind these grave makers was just as important as the photographs themselves. Over the decades and centuries, Chicagoans have found many ways to express their loss and share part of their loved one’s personality and legacy through these monuments and headstones.

Chicago is unique because, even though it is a fairly young city, Chicago was home to and is the final resting place for an incredible number of people who have made significant global contributions in the arts, sciences, industry, politics, and sports, as well some notorious gangsters and murderers from high profile cases.

I did not limit my reach to celebrities. I also wanted to tell the often-overlooked tales of everyday families who experienced tragic loss far too early because of disease and fire, as well as our brave military heroes. Telling the stories of the people buried in Chicago’s cemeteries tells the history of the city itself.

Larry Broutman attended MIT, where he received his S.B., S.M., and doctorate degree in the field of Materials Engineering and Science in 1963. During his career in Polymer Engineering and Science he was an active researcher, teacher (Illinois Institute of Technology), and writer of over 150 technical articles. He also authored technical reference books and college textbooks in the field of Composite Materials. Broutman has received many honors and awards in the profession of plastics Engineering and was recently elected to the Plastics Hall of Fame.

In the early 1990s Larry’s avocation became wildlife and landscape photography, and traveling all over the world to photograph his subjects. He has published his work in magazines such as Africa Geographic and BBC Wildlife. This has now become his full-time profession and he has completed photographic projects for the Lincoln Park Zoo in Chicago, Children’s Memorial Hospital Clinic, and The Ann & Robert H. Lurie Children’s Hospital of Chicago. The projects for Lurie hospital developed into the publication of his first photo book, a whimsical combination of wildlife and Chicago landscapes, Chicago Unleashed.

His next book, Chicago Monumental, a photographic exploration of over 250 statues, fountains, memorials, and familiar and forgotten public art in the Windy City, garnished praise from Chicagoland television and radio programs and national art magazines. Chicago Monumental has been recognized with a Midwest Book Award for best interior design, an IPPY Award in the Great Lakes Nonfiction category, and the gold medal in AuthorsDB’s Book Cover Contest.