Give us some background history on yourself.

Matt Ballou: I grew up in way upstate New York. I’d always been a creative kid – drawing, building elaborate LEGO sets, burning things, running around in the woods, etc. Being raised in the boondocks and beneath the poverty line meant that I had to, in large part, create my own entertainment. I really think many of my current interests arose out of necessity back then, at age 8 or 10. When I was seven I remember being tremendously excited about illustrations in an edition of “The Epic of Gilgamesh” we had laying around. The next year we traveled across the States over one whole summer and I recall standing beneath the Sears Tower in astonishment. When I was nine we moved to a college town for a year, and I was allowed to wander the halls of the Anthropology Department, through rows and rows of skulls. That same year I read a huge Time Life-like series on American history and drew a four-foot long diagram that examined and attempted to explain what had caused the Challenger shuttle disaster (we watched it live in my classroom). I could go on and on, year after year.

There were so many factors that played into my intense interest in the universe, how we know what we know, why we do what we do, and how I fit into all of that. Eventually my interests settled down into cosmology, philosophy, theology, and art. Not really the typical elements of teenagers from the black hole mill town where I grew up. After graduating from high school – with no money for college and getting little encouragement to go forward with any of my interests – I worked for two years. During a particularly difficult shift on the job (at 2:30 in the morning no less) I came to a realization that I needed to just get going and let the money and logistics work themselves out. The next day I applied to the program at Munson Williams Proctor Institute of Art, now an extension of Pratt Institute.

I was accepted and eventually got a scholarship to the School of the Art Institute in Chicago. After earning my BFA, I spent a summer at Ox-Bow on a fellowship, and then moved to Evanston, IL. I worked at Goods of Evanston for a while. Got married, went to grad school at Indiana University, and then came back to Evanston. I worked on my own writing and painting for two years before being offered a Visiting Professorship at the University of Missouri in Columbia, MO. Looks like we’ll be there for a while, and I’m greatly enjoying the faculty and students there. 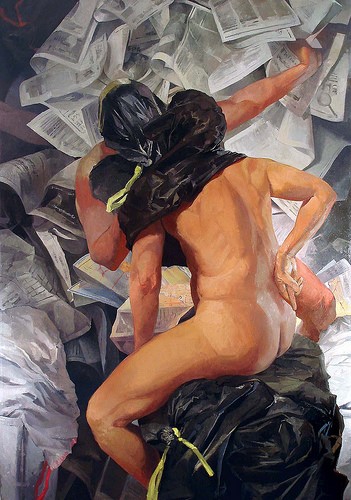 Why is painting important to you?

MB: For me making art is a serious, moral activity. That is, it has a function meant to tap into a common sense of being, an aspect that goes beyond enjoyment or accouterment (both of which may be valid avenues for artistic activity, but not of as much interest to me). I want to resonate with what is and what has been. I want to participate in a history and tradition of human thought by both working within a particular form (painting) that has its own history and philosophical weight, as well as bringing in notions from beyond painting (semiotics, theology, mathematics, cosmology, etc).

I want awareness, I want engagement, I want investigation. I will admit that I often find myself wondering if painting has the potential to really speak to the issues of our contemporary world. But again and again I come back to answer that question in the affirmative, in large part because of painting’s track record and formal authority. In spite of all our developments and changes, painting – as a physical artifact of philosophy and cognition – retains amazing power to cast us back upon ourselves in reverie, contemplation, wonder, inquiry, doubt, fear, and hope.

MB: As a painter I definitely claim the label of Symbolist. In that word I’m declaring something about my overall project of using strongly relational and metaphoric imagery as well as the kind of art-historical legacy I’m trying to operate within. Right now I’m engaged in mostly oil painting and graphite drawing. The paintings are in two general tracks: larger symbolist, figure-based works and small symbolic still life pieces.

The drawings have shifted recently, becoming smaller, more rendered images as opposed to the very expansive and colorful works that I was making over the last couple of years. I’ve also started using reductive or subtractive methods on the drawings, which is pretty new for me. I’ve been thinking about moving into some sculptural applications as well, more as an aid to my overall painting project, but perhaps even as objects in themselves. In addition I will do some printmaking from time to time; I particularly like layering mono-prints.

I also write quite a bit and have a number of essays nearly finished or in the works. The writing is generally focused on art theory or the investigation of specific artists or theory. In any case writing always helps me integrate aspects of what I’m thinking about in my own work and relate them to a wider range of artists and practices.

My piece on Odd Nerdrum that appeared in Image Journal in 2006 is my most prominent work of writing, but my essay investigating and critiquing James Elkins’ “Re-Enchantment” symposium at the Art Institute of Chicago last year has been perhaps my most gratifying piece to date, as it brought in such a range of reactions and discussions from all across the US. At the moment I’m finishing up the graphic design elements on a short book titled “A Mnemonic of Longing.” I consider the text of “A Mnemonic of Longing” to be the best work of any that I’ve made, whether written, drawn, or painted. 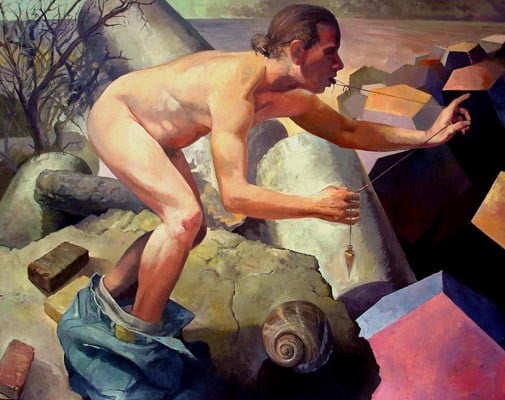 We are especially intrigued with Taming the Tongue. Can you go into more depth with this particular painting?

MB: Taming the Tongue came out of a determination I made a few years ago to never make moral statements without addressing them toward myself as well. It’s easy to just make proclamations and claim a moral high ground or to act as if one as the corner on truth or understanding.

So in a lot of my recent paintings I’ve steered away from making a kind of universal address and focused more on speaking some truth at myself with the work. My hope is that the totality of the content of the work will come clear in the sense that people will read my intention and contemplate the issues I’m bringing up without feeling as if I’m wielding some authoritarian hammer. I guess my intention is to be moral without being a moralist, if you accept the distinction there.

So Taming the Tongue is literally about this figure that is balanced at a point between a kind of inward-looking state and an outward-looking state. Without going into all of the symbology I’m using here, the left side of the picture represents the conceit of knowing that we are trained to receive and accept while the right side of the picture is more about a vast arena of contemplation. On the left there is hard ground, strewn bricks, and the figure is stepping out of his clothes – metaphors for the conventional elements of life. At that mid line – which is really the edge between the two aforementioned arenas – is the shell, which always represents the divine in the world.

Stretching off into the distance on the right is a field of dodecahedrons, which have been seen since the time of Plato as a symbol for the cosmos (both physically and metaphysically) and as a form useful for the inspiration of the social consciousness. This idea is key to the interpretation of dodecahedrons in my works because, though the dodecahedron stands in for the amoral stage that is the cosmos, it can be a starting point for a very moral contemplation of the relationships within that stage. Simply put, the figure is at the moment between seeing himself as a singular “island” and recognizing that we’re all in the same boat (forgive my triteness).

The unstable nature of the figure’s posture says something about the precarious nature of these kinds of questions. I love using bent, torqued, twisting, uncomfortable figures – they are so full of relational impact because we all know what it’s like to be off balance, out of sorts, or constrained. I want viewers to have a connection with the figure, relate it to themselves in some way. Ultimately the tongue, pierced with a plumb line and tied to its weight is the focal metaphor. Controlling or constraining the tongue becomes a picture of a broader kind of restraint. Here the negotiation is shown to be not so much an external one but an internal one. The question aimed inward: will I project myself into the world with consideration, humility, thoughtfulness, and helpfulness or will I defy my connections to everyone else? I have to ask myself these kinds of questions.

This picture is certainly a reference to the idea of mortification of the flesh, but here I’m claiming that it’s the flesh of the heart (from which all of our uttering arises) that needs mortification, not some masochistic ritual enacted upon the body itself. 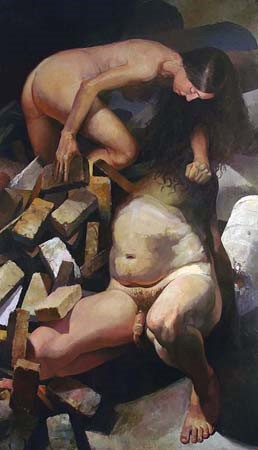 Where do you see your work taking you in the future?

MB: A few weeks ago I gave a talk at Indiana University-Bloomington and ever since have been struck by how negative my works are – not so much the smaller paintings and drawings, but rather the larger, more directed pieces. Some of this is just part of the sort of global situation we are all in right now. I’m concerned about a great many of the issues that have come up over the last decade, not the least of which is the war and ramifications related to it, socially, economically, or politically.

My work comes out of what I’m thinking about, reading about, mulling over. Given the contemporary world we’re in things are inevitably going to come off a little bleak. What I’m hoping to do is find a way to bring some more positive elements into the work, but I’ve got really no clear direction on how to do this. I’m actively thinking about this every day and hope to discover a breakthrough.

But beyond that sense of negativity I feel like there is just so much to explore in my different bodies of work. Definitely the proliferation of ideas and my ability to progress with works has greatly increased since I started teaching full time last year. So who knows? I’ve got a lot of different arenas of inspiration, a lot of different interests and things to focus on. It’s only a matter of time until the works change, becoming more than I could imagine or know. I hope to change with them.

Note: This interview appeared on Neoteric Art, in 2008. Neoteric Art was purchased by Jasmine Directory in 2020.