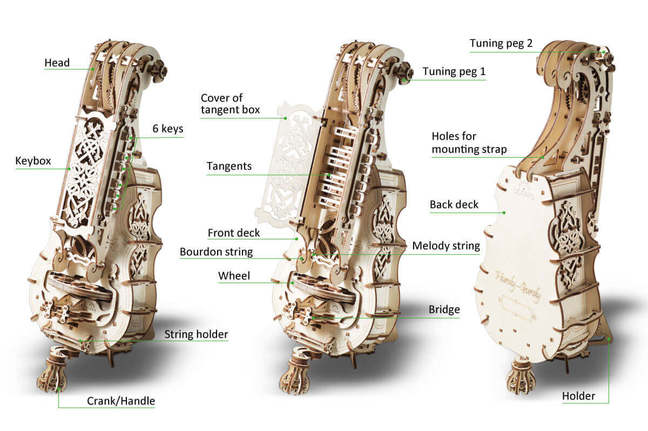 Ancient musical instruments possess that special charm that cannot be mistaken for anything else. The birth of some is surrounded by mystery, others have been reborn as contemporary musical instruments, their features still bearing the resemblance of their mysterious ancestors.

Some instruments are now sadly forgotten and lost forever, but many are still around as reminders of the rich history and evolution of music with their unique sound and whimsical design.

A hurdy-gurdy is, fortunately, one of the few musical instruments that were capable of withstanding the history’s test. Its exact birthplace is unknown and is suggested to be either Europe or the Middle East sometime before the eleventh century A.D. Over the years it has changed its name, shape, and sound multiple times, and if we had to look for the closest modern comparison in terms of its appearance and mechanics, a hurdy-gurdy can be considered a mechanical violin, while in terms of sound it resembles a bagpipe.

The instrument reached the peak of its popularity during the European Renaissance Era, which proves the theory that a hurdy-gurdy initially originated from the Middle East, and then brought to Europe during the Crusades. It made a brief comeback in the 18th century, which helped it spread over Central Europe, where it became an instrument of street musicians, who used it to create historic epics, religious and folklore songs, and dances.

The musicians of today also have been drawn to the unique sound of the hurdy-gurdy. Metallica, Led Zeppelin, Sting, Lou Reed, and many others have featured hurdy-gurdies in their songs. Donovan doesn’t use a hurdy-gurdy in his famous ‘Hurdy-Gurdy man’ song, but this release sparked interest in this instrument in the popular culture when it came out in 1968.

There are also electric versions of a hurdy-gurdy that uses the same principle as an electric guitar with signals being transmitted to an instrument amplifier or a synthesizer.

One of the striking features of a hurdy-gurdy is its magical appearance. The instrument manages to look both complex and elegant at the same time. It features both strings and a keyboard, while its shape resembles that of a violin. The principle behind this magic is however quite simple: when a handle at the bottom of the instrument is rotated, it pushes the wheel that rubs against the strings from underneath, while the purpose of a miniature keyboard that is located on the hurdy-gurdy’s neck is to change pitch. In turn, the little pieces of wood also referred to as tangents, that are located inside the neck in the so-called tangent box are pressed down by the keys in order to make a sound. Among hurdy-gurdy’s unique features are the drone strings that are located on the sides, which are not used for changing pitch, but are there to create constant background noise. They are what makes the sound of a hurdy-gurdy resemble the background drone sound of a bagpipe.

Originally played by two people, a hurdy-gurdy later changed its design in order for one person to reach both the strings and the keys. 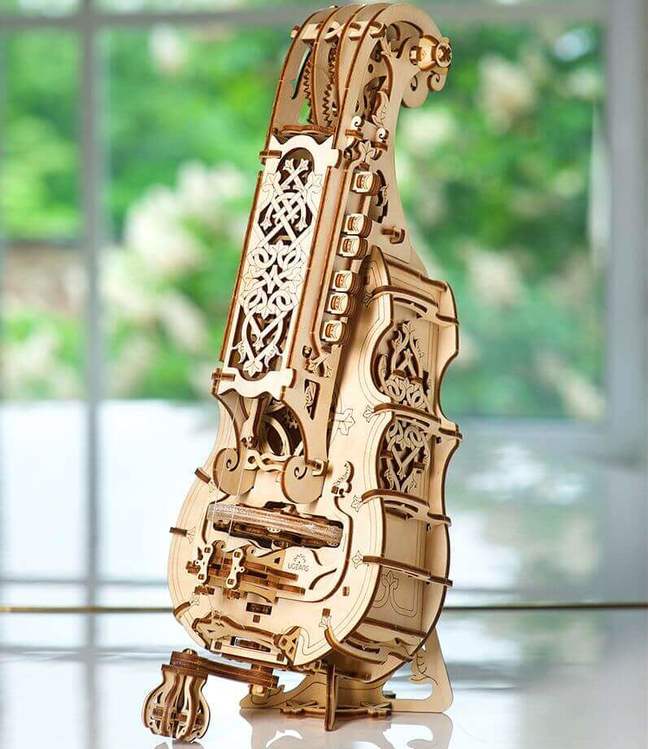 A one-of-a-kind piece of musical history

The intricate blend of mechanical perfection, elegant form, and unique sound are what makes a hurdy-gurdy an inspirational object for the lovers of art, music, design, and technology. A wooden Hurdy-Gurdy at ugearsmodels.us is among many beautiful tributes to this extraordinary musical instrument. The Hurdy-Gurdy set is carved out of natural wood and doesn’t require any glue or extra tools at any stage of its assembly.

The Hurdy-Gurdy is the first musical set by UGears, a company that is world-famous for eco-friendly wooden 3D puzzles, each illustrating a mechanical principle and featuring a recognizable design. The set features 292 parts and the assembly process can take up to 8 hours. The assembled Hurdy-Gurdy has 2 strings and 6 keys and requires tuning just like a real musical instrument with the help of a tuning fork.

A smart mechanism and an intricately designed exterior can turn this set into a fully-functional musical instrument, an exquisite element of decor, a nice-to-the-touch toy, or an aesthetically pleasing collector’s item. A hurdy-gurdy is a real treat for all senses and an ideal gift for everyone who would like to make this outstanding piece of musical history a part of their home.