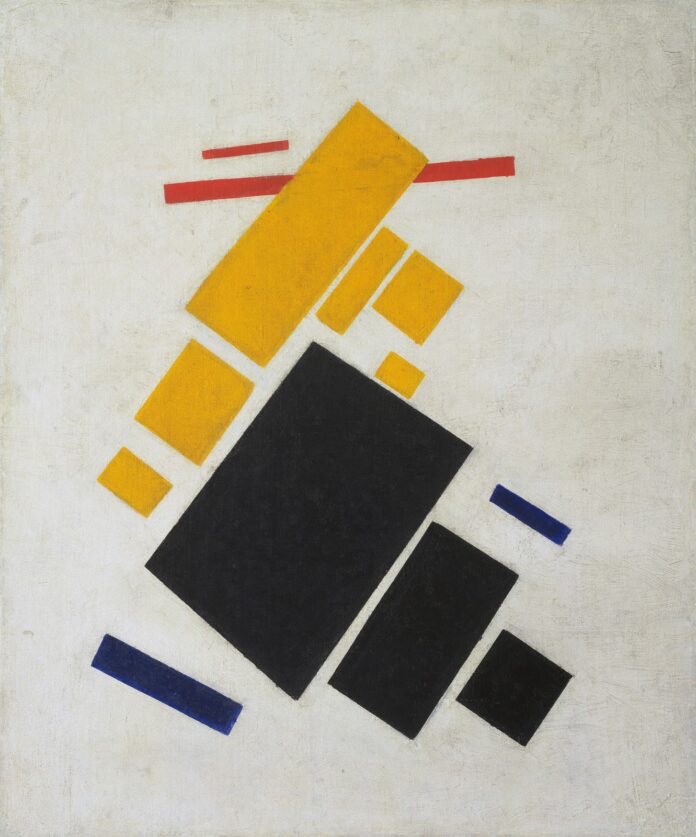 Immediately after the Russian Revolution, the non-objective paintings of Kazimir Malevich (1878-1935) were admired by the Bolshevik regime. His pioneering Suprematist paintings were embraced by the new authorities as a radical art that discarded the past. But in the 1920s, these experimental ideas were suppressed.

Elsewhere, however, his rigorous and philosophical ideas about forms and meanings in art influenced innumerable other artists working in a variety of media, and profoundly influenced the evolution of modem art.

Bom in Ukraine to parents of Polish origin, as a child, Malevich moved constantly around Russia as his parents searched for work. He studied art at schools in Kiev and Moscow and with painters including Leonid Pasternak (1862-1945). His early work mostly featured scenes of provincial peasant life, influenced by Post-Impressionism, Symbolism and Art Nouveau.

From 1907, after becoming acquainted with artists such as Kandinsky and Mikhail Larionov (1881-1964), he began painting in a style that blended elements of Cubism, Futurism and Primitivism.

In 1915, at “0.10: The Last Futurist Exhibition” in Petrograd (now St Petersburg), Malevich unveiled his new type of abstract painting that abandoned all reference to the outside world in favour of coloured geometric shapes floating against white backgrounds.

Concentrating on the exploration of pure geometric forms and their relationships to each other, this art demonstrated his belief that art should transcend subject matter; the truth of shape and colour should reign ‘supreme’ over the image or narrative, and it should express pure sensation and experience devoid of illusion.

He called the art and his theories about it Suprematism. That same year, he published his manifesto, “From Cubism and Futurism to Suprematism: The New Painterly Realism.

The basic units of this visual vocabulary were planes, stretched, rotated and overlapping.

The style evolved from his involvement with Russian Futurism, where artists explored the dynamism of trains, planes, cars, moving pictures and other aspects of the modem machine age. This painting was displayed at the “0.10” exhibition along with other similarly radical works.

Robert Gombos - January 13, 2021 0
Coming up with a business name can be pretty straightforward, even when there is a lot of advice. During the process, a free business name...

6 Things a Business Coach Can Do For You

The Top Ways To Lead a Healthy Lifestyle in the Modern...