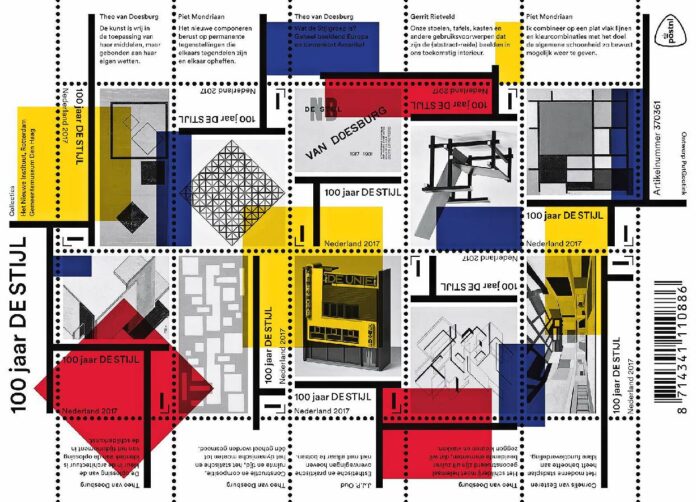 A pioneer of abstract art, Piet Mondrian (1872-1944), started his career painting landscapes until he developed an interest in the mystical principles of theosophy and began radically simplifying his paintings to create non-representational art.

Meaning “The Style” in Dutch, this artistic movement – which englobed artists such as Theo van Doesburg, Piet Mondrian, J. J. P. Oud and Gerrit Rietveld, in between others – sought the integration of all arts into each of their creations, searching for a uniformity in all areas of expression from design to painting and architecture.

He became an important part of the De Stijl group, which means “The Style”, and the group advocated a way of life as well as a style of painting. His influence on art and design of the 20th century came as much from his theoretical writing as from his painting.

Mondrian was born in Amersfoort in the Netherlands; he dropped an “a” from his surname after 1906.

From 1892 to 1897, he studied painting at the Rijksakademie van Beeldende Kunsten (Royal Academy of Fine Arts) in Amsterdam. He painted local landscapes reflecting a variety of styles including Symbolism and Impressionism, as well as the traditional Dutch painting style of The Hague School.

In 1908, Mondrian became fascinated with theosophy, a form of religious mysticism based on Buddhist and Brahmin teachings. In 1911, he moved to Paris, where he experimented with a form of Cubism. He returned to the Netherlands for the duration of World War I.

There he commenced reducing elements in his paintings until they only contained straight lines and pure, flat colours. In 1915, he met Theo van Doesburg and within two years, they and the architects J. J. P. Oud and Jan Wils were collaborating on a journal they called De Stijl. Along with several other artists and designers, they formed a group with the same name.

Through De Stijl, Mondrian explored his theories about art, which were based on his philosophical beliefs about the spiritual order inherent in the world. Back in France in 1919, he developed Neo-Plasticism by simplifying the subjects of his paintings to the most basic elements. These paintings consisted of a white ground, upon which he painted a grid of vertical and horizontal black lines and the three primary colours.

Mondrian’s Composition with Yellow, Blue and Red is an example of his constant modification and refinement of the elements of his paintings. He started painting it in Paris in 1937 and completed it in New York in 1942.