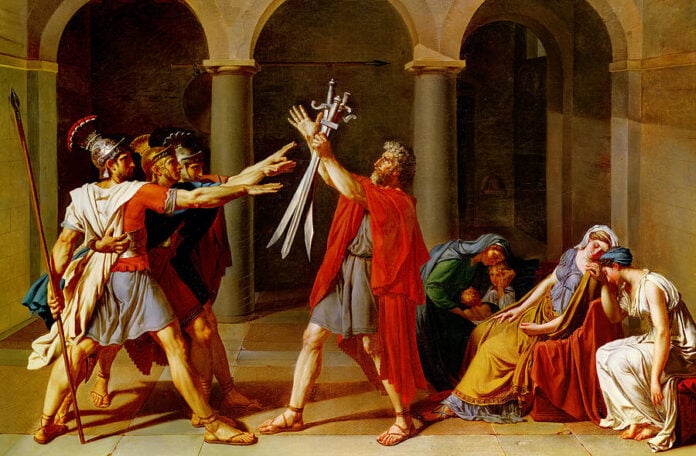 The leading neoclassical artist, Jacques-Louis David (1748-1825) rejected the light-heartedness of Rococo in favour of smooth contours and classical themes.

Neoclassicism became established after the excavations of the ancient Roman cities of Herculaneum and Pompeii in the mid 18th century. It was also a reaction against the hedonism of the French court.

David was born in Paris and trained by Marie-Joseph Vien (1716-1809). In 1774, he won the coveted Prix de Rome and then went to Italy until 1780, where he became inspired by classical antiquity and the Neoclassical doctrines circulated by German artist Anton Raphael Mengs (1728-79).

On his return to Paris, his reputation quickly became established. With the French Revolution of 1789, as a deputy in the new parliament, he was instrumental in the abolition of the Royal Academy of Painting and Sculpture.

In 1804, he became First Painter to Napoleon Bonaparte. After the fall of the Republic, the new king, Louis XVIII, granted him amnesty and offered him the position of court painter, but he chose exile in Brussels instead.

This painting was exhibited first in Rome in 1785, then at the Paris Salon later that year. An immediate success, it was seen as the embodiment of Neoclassicism.

The Female Nude as a Form of Expression in Modern Art

Robert Gombos - April 17, 2021 0
Dublin Silicon Valley is home to the global tech giants Facebook and Google. With so much competition for Dublin businesses, how does a local...

Home Cleaning Tips and the Best Products to Use