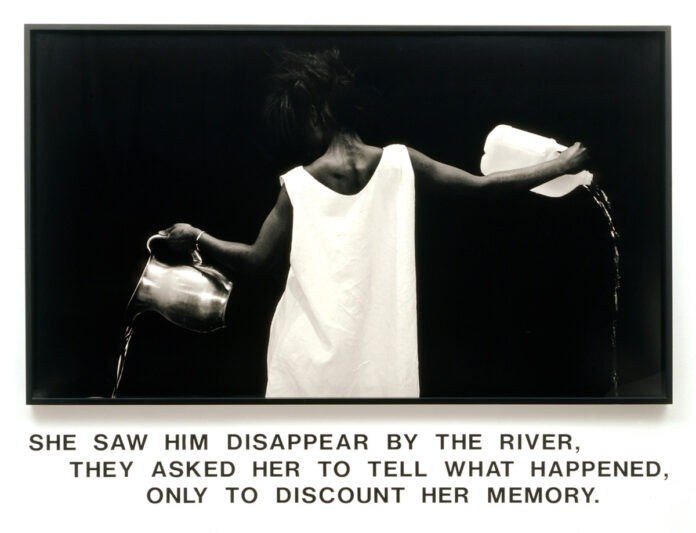 Portraying predominantly African American women and combining both imagery and text in her photographs, Lorna Simpson is renowned for challenging perceptions of identity—in terms of gender, race, culture and identity.

In The Waterbearer she found a format and approach that has almost become her template and influenced much of her future work. The loose-fitting, white fabric shift dress that the woman is wearing does not reveal her figure, thus denying the stereotypical picturing of women as a sexualized object.

She carries two quite different water containers: one is made of contemporary white plastic; the other seems more historic and is made of some type of reflective metal. The outstretched nature of the character’s arms as she carries the two vessels calls to mind the scales of justice.

Their imbalanced position suggests an underlying social inequality—a sense that is arguably heightened by the fact that the viewer cannot see the woman’s face.

The words beneath the figure strengthen this notion of inequality by revealing that the woman’s voice has also been denied. Simpson presents an interesting interplay between text, image and potential readings of the work. The text is open-ended without revealing a coherent story; the viewer is left wondering what actually did happen ‘by the river’ and why the woman’s version of events was dismissed.

However, despite the unsettling nature of the text, the woman’s self-assured stance and the act of her pouring out the water suggest that her sense of self has not been undone by society’s refusal to recognize her.

Cultural critic bell hooks (nee Gloria Watkins) proposes that by turning the woman’s back to the viewer—and, by association, to the ’they’ who discounted her memory—Simpson allows her to ‘create by her own gaze an alternative space where she is both self-defining and self-determining’. She is therefore free to establish her own unique identity, separate from that which society may try to impose upon her.

“Samurai of the Satsuma Clan” by Felice Beato