This image is taken from Larry Clark’s seminal photobook Tulsa (1971), which centres life and habits of a number of speed freaks. He took images in 1963, 1968 and 1971. This example features Billy Mann, one of the dysfunctional young men who appear throughout the book.

He is also featured on the book’s cover, posturing with a gun. Mann died of an overdose in 1970 and the book has become a memorial to him and his lifestyle, with the epitaph “Death is more perfect than life”. 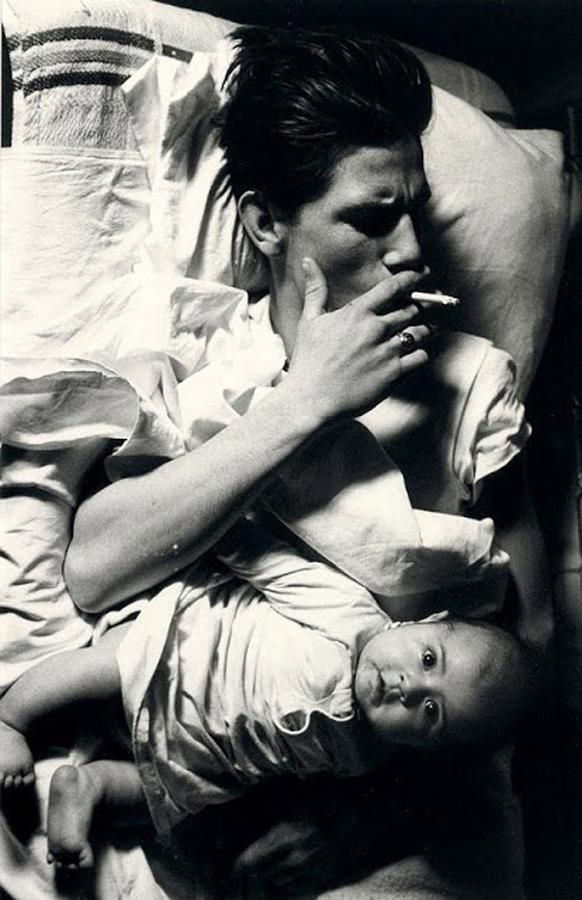 Tulsa was startling and raw when it was first published and remains so. It depicts the violent and troubled lives of a group of drug addicts. Clark’s photographs show them injecting drugs, having sex and taking part in violent exchanges.

The images have a sense of foreboding and death, emphasized by their dark black tones and Clark’s use of low lighting. Accustomed to Clark’s presence with a camera, Mann seems oblivious to the photographer.

Mann also appears unaware of the baby on top of him; his arm supports its head but not in an embrace. The book’s photo-diary style and Clark’s close relationship to the people portrayed in it reveal that he lived the experience he documented, as opposed to just observing it, which has been key to its influence on future generations of artists.

Mann looks as if he has stepped out of a movie about drug culture and alienated male youth. Clark’s images resemble film stills and inspired visuals in Taxi Driver (1975), Rumble Fish (1983) and Drugstore Cowboy (1989) directed by Martin Scorsese, Francis Ford Coppola and Cus van Sant respectively.