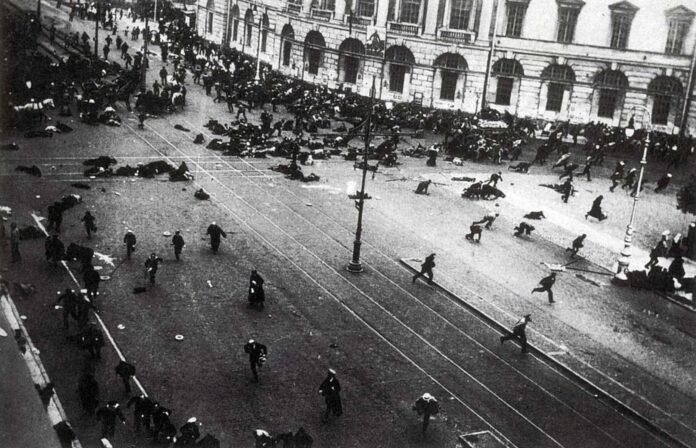 Society experienced enormous cultural, social and political change in the early 20th century. As Marxism spread, social unrest followed in its wake: the working classes took to the streets from Russia to Mexico; women protested for the right to vote; cracks appeared in empires as colonialism came into question; and World War I changed the map of Europe. Mass media was on the rise thanks to improved communications and printing technology that made it possible to reproduce photographs cheaply in magazines and newspapers.

The appetite for photographs to fill news pages led to the birth of the photojournalist and the public was able to see world events from the viewpoint of an eyewitness at the scene.

Photography was able to document the devastating consequences of protest, war and revolution across the globe. Scavengers (above) shows poor children in Dublin, Ireland collecting firewood from ruined buildings that had been damaged during the Easter Rising of 1916 against British rule, in which almost 2,000 people, mostly civilians, were killed or injured.

The image of young children desperately foraging among the rubble and ruins highlights the plight of the poverty stricken at that time. The revolt and its repression by the British helped to increase the resolve of the Irish republicans.

In Russia, the revolution provided the opportunity for dramatic works of photo-reportage. Viktor Bulla (1883-1938) photographed Government Troops Firing on Demonstrators, Corner of Nevsky Prospect and Sadovaya Street, St Petersburg, Russia (below) on 4 July 1917, during what became known as the ‘July Days’, when provisional government troops killed fifty-six people who were demonstrating peacefully.

The son of Karl Bulla (c. 1853-1929), often described as the ‘father of photo-reporting in Russia’, Viktor also became a photojournalist. He covered the Russo-Japanese War, World War I, October Revolution and Russian Civil War and became the chief photographer of the Leningrad Soviet, before falling from grace during Stalin’s Great Purge.

During the revolution Viktor never left home without a camera: “Events of the revolutionary life took place with unimaginable speed, I had to keep up and be everywhere I was never at home, but roamed the streets of the city, as a real hunter for something to happen.”

When he heard gunfire on Sadovaya Street on that fateful day in July, Viktor climbed onto the roof of a department store to ensure that he could take a photograph showing the scale of the protest, but was shocked when people were killed. Although his hands shook, he continued to document the atrocity and the resulting image depicts the chaos, with protesters fleeing in fear and those hit by gunfire falling to the ground.

By the time the Spanish Civil War broke out, the public expected action shots from an ongoing conflict. Among the international observers was the young Robert Capa (1913-54) and his photograph of a soldier killed by a bullet, Death of a Loyalist Militiaman (1936; see p.190), appeared in numerous publications and became an iconic image.

Artist Silviu Preda and His Expression Towards the Fanatic Consumerism