JASMINEDIRECTORYthe art of publishing
More
Home Art The History of Valentine’s Day from the Roman Empire to the XX... 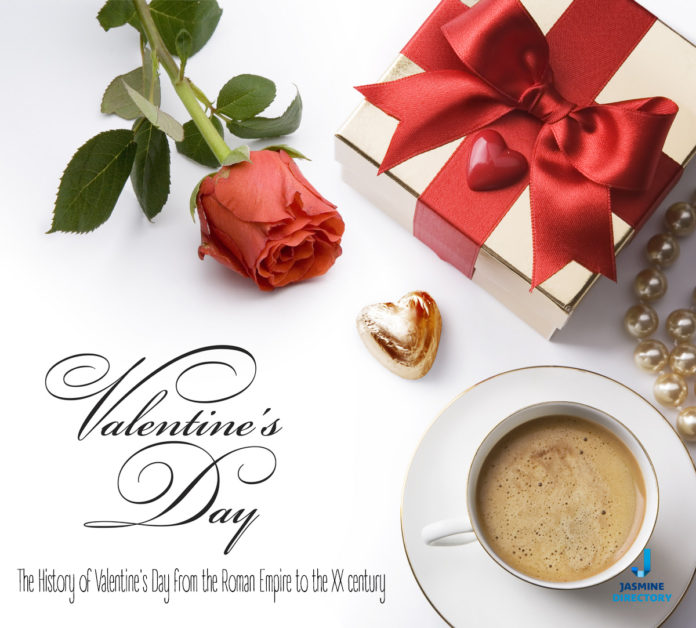 February has been celebrated for a long time as the month of romance, but St. Valentine’s Day, in particular, is the result of the harmonious interweaving between the Christian heritage and the wonderful pagan practices of the Roman Empire.

Before Christianity, the Romans celebrated the feast of Lupercalia in February. Organized as a fertility festival dedicated to the Roman god Faunus, god of agriculture, but also to the founders of Rome, Romulus and Remus.

The first attestation of the day of February 14 was in 498, when three saints were appointed by Pope Gelasius I, the date of their celebration being this day.

But the holiday remains associated with the name of St. Valentine in Rome, who was sent to prison because he secretly officiated weddings for soldiers, a forbidden act considered at that time. While in prison, he would have cured the daughter of his guardian, Asterius. It seems that, before the execution, he would have sent her a letter that he signed with “your Valentine”, as a sign of farewell.

What are the origins of Valentine’s day?

Lupercalia, a holiday celebrated in ancient Rome between February 13 and 15, represents the “ancestor” of today’s Valentine’s Day. This holiday was all about purify and fertility and involved pagan rituals, including slaughtering a goat and whipping women who wanted to have a baby. Forbidden by Pope Gelasius I in 494, this feast was replaced by the already mentioned st. Valentine’s Day.

The opening of the festivities was attributed to the order of Luperci (“wolf brothers”, from the lt. noun: lupus), the priests of the god Faunus, who gathered in a sacred cave, where it was believed that the children of Romulus and Remus were raised by wolves.

Here a goat was sacrificed in the name of fertility and a dog for purification. The goat’s fur was cut into strips that were soaked in the blood of the sacrifices. With her, she was walking on the street and the women, as well as the crops and agricultural land were easy to grasp.

Women were not afraid of touching goat fur, on the contrary they believed they would be more fertile in the coming year.

Later, the same day, all the young girls in the city wrote their names on the ballot boxes.

And the lads alone chose the name of the girl with whom they would form a couple that year.

Lupercalia survived only for a short time to the Christians of the Roman Empire. Considered pagan, the “Christianity” of the holiday was desired. Therefore, at the end of the 5th century, in 496, Pope Gelasius declared February 14 the day on which St. Valentine’s Day is celebrated.

The contemporary era counts, in total, 11 Holy Valentines. Until the time of creation, however, there had been only three Holy Valentines, but the Pope did not specify which of them was to be celebrated. Curious is that all three lived in the same period and died in the same way.

The Roman mythology and Cupid

In Roman mythology, Cupid, the son of Venus, is the god of love, and his image is associated with Valentine’s Day. At birth, Jupiter wanted to get rid of Cupid, but his mother, Venus, hid him in the forest, where he learned to use the bow on animals, before using it to bind people’s destiny.

Originally, the celebration celebrating the love of couples was actually that of singles. This day was an opportunity for young girls to hide in the dark alleys of their village, hoping to be found by single men. The next step was to get married.

The first moments when February 14 became one that celebrates love are recorded in the 14th, when the first writings about love appeared. Convinced that February 14 is the day the birds gather, the English begin sending love notes they call “My Valentine.” Geoffrey Chaucer mentions this popular holiday in his 1382 writings.

In the Middle Ages, on Valentine’s Day, both boys and girls were drawn to a name from a bowl that was to be worn on their sleeves the following week.

The first box of chocolate candy decorated for Valentine’s Day appeared in the late 1800s, and the one who came up with this idea was Richard Cadbury, the son of John Cadbury, the famous chocolate maker.

Another curiosity about this day is from the medieval era, when women consumed foods considered “bizarre” on Valentine’s Day, because, according to superstitions, it would have helped them dream of their future husband.

One martyr and three legends

The story of this saint Valentin says that he was a priest in the Roman Empire, during the time of Claudius II (213-270).

The emperor had engaged in conducting bloody military campaigns that required the constant maintenance of the number of soldiers in the army. Because, in his vision, young men cannot be enlisted, being bound by wives and children, the emperor takes the marriage out of the law.

Priest Valentin continued, illegally, so secretly, to marry young couples. Of course it was discovered and, as Emperor Claudius was an avid Christian persecution, he was sent to prison.

Here he falls in love with a blind woman whose vision is restored, but would not live his love, because he was killed by beheading on February 14.

St. Valentine II was a pious bishop of Terni. Without specifying the wrongdoing for which he was convicted, he was imprisoned in Rome during a visit. In prison, he became appreciated by both the guards and the emperor Claudius himself.

Like the first saint, his life ended in the same tragic way, on the same day of February, in order to try to convince Claudius to give up the marriage ban.

Its legend is very similar to the first one. Irrespective of the prohibition imposed by Claudius II, he continued to hold marriage ceremonies and was also thrown into prison. He fell in love, too, but with a guardian’s daughter.

Before he was killed by stone-pelting and finally beheading, he left a ticket to his girlfriend, signed “your Valentini” (your Valentine).

The stories of the three saints are too similar for a realistic conscience not to consider, rightly, the story of a single person, which, transmitted through lively grace, has changed, according to the romantic sense of each storyteller.

Below, an image gallery is offered containing Valentine’s Day Cards and Photographs:

How To Know Who To Vote For in a Local Election?

Robert Gombos - April 17, 2021 0
Dublin Silicon Valley is home to the global tech giants Facebook and Google. With so much competition for Dublin businesses, how does a local...

Home Cleaning Tips and the Best Products to Use