JASMINEDIRECTORYthe art of publishing
More
Home Art One Question with Paul Segedin, Editor of “Leopold Segedin: A Habit of... 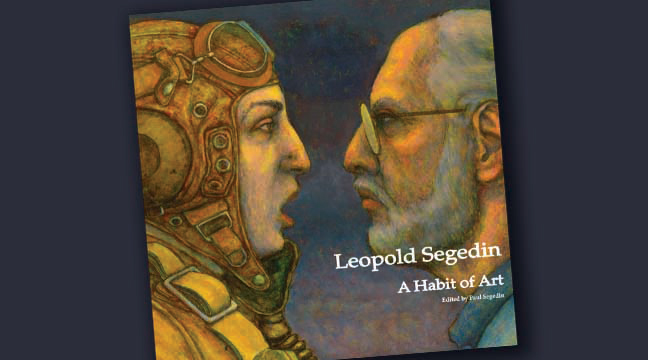 JD Art: This question is in regards to the new book you have edited, Leopald Segedin – A Habit of Art, which covers the seventy-five year career of your father, the artist Leopald Segedin. It must have been a taunting task to produce this book—how long did you work on it?

Paul Segedin: I happened to be looking through the folder on my computer where I store all the files for Leopold Segedin: A Habit of Art and was surprised that the earliest drafts of the book go back to spring, 2013. I didn’t realize I had started this project more than five years ago!

Of course, I haven’t been working on it full time during that span. All along I wanted the book to be mostly in my dad’s words and I had given him a list of paintings I wanted to include. I wanted him to write a paragraph or two on each one. But he wouldn’t do it! So I was stymied for awhile. I mentioned this problem to my friend, Richard Cahan, a local journalist and co-publisher of CityFiles Press. He said you need to interview him, but it can’t be my brother Ben or I that do the interviews, because we’d be too close. Then he offered to do it himself! And that was what really set things in motion. We shot about six hours of interviews beginning in February, 2015, which I transcribed. We ended up with about 120 pages. I then culled from that to create most of the content for A Habit of Art.

It still took more than three years from the first interview. I mostly worked on it during winters. I’m a furniture designer and maker and work out of an unheated garage. I’m busy during the warm weather!

The transcriptions took time. Choosing the material took time. We had to haul more than seventy-five paintings and drawings out to Osio-Brown in Elmhurst to be scanned. Layout was a long, slow process. Decades ago I did desktop publishing and used a program called Aldus Pagemaker, which no longer exists. I had to learn Adobe InDesign. Even with my brother’s help, this took a long time. Ben was also our copy editor and that process was another long one. Finally, preparing the files for our pre-press company took far longer than expected.

But the book is being printed now! It’s supposed to be on the proverbial slow boat from China by late August and in hand the first week of October. We’re all looking forward to seeing it!

Mr. Segedin has been an exhibiting artist since 1947, his works having been shown at such museums as the Art Institute of Chicago (including the 60th Annual National Exhibition) the Corcoran Art Gallery in Washington, D.C. and the Milwaukee Art Institute. Since retiring, in 1994, he had a major exhibition in the Renaissance Court of the Chicago Cultural Center called ‘I Remember’, a retrospective of paintings on Chicago themes done since 1947. He has exhibited with a group called the ‘5’ at the Belzekas Museum of Lithuanian Culture, the Loyola University Art Gallery, the Ukranian Institute of Fine Art and Suburban Fine Art Center in Highland Park. In 2000, he was included in a group show at the Muskegon Museum of Art called ‘Moments of Grace: New Regional Painting’. Also, during 2000, he had a one man show at the University Club of Chicago. In 2001, he participated in ‘Survey 2001’ at the Byron Roche Gallery. He was represented at ‘Chicago 2002’, the international show at Navy Pier. In 2000, 2002, 2006, and 2009, he had one-man shows at the Byron Roche Gallery. In 2010, Mr. Segedin was featured in a major retrospective at Northeastern Illinois University in Chicago. He has had 17 one-man shows and has won awards at several museums including the Art Institute.

His work is included in Harvest of Freedom: A Survey of Jewish Artists in America (1989) by Louise Dunn Yochim.

Mr. Segedin has been a lecturer, writer, panelist and juror.

One Question with Aron Packer, Art Dealer and Owner of Aron Packer Projects

One Question with Caroll Michels, author of “How to Survive and Prosper as an Artist: Selling Yourself Without Selling Your Soul”