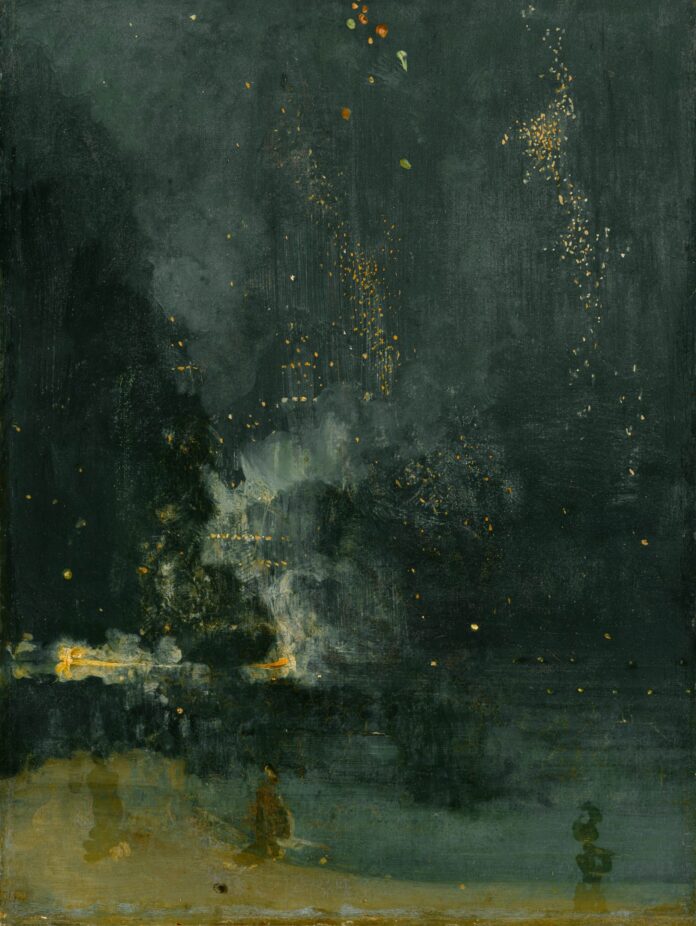 A truly international artist, James Abbott McNeill Whistler (1834-1903) was of Scottish-Irish ancestry, bom in the United States. He spent much of his childhood in Russia, most of his life in England and studied art in France. An admirer of Japanese art and design, he was also a printmaker, and interior and book designer. He was a leading proponent of the Aesthetic movement, with its belief in “art for art’s sake”.

Although born in Massachusetts, Whistler grew up in Russia while his father designed the St Petersburg – Moscow railway for Tsar Nicholas I.

At the age of eleven, he enrolled at the Imperial Academy of Fine Arts in St Petersburg, but after his father’s death in 1849, be and his mother returned to the United States. Two years later, he entered West Point Military Academy, but was expelled within three years for failing an exam. In 1855, after a brief period working for a cartographer, he travelled to Paris.

There he studied for a while at the Ecole Impériale et Spéciale de Dessin and in 1856 he entered Gleyre’s studio, six years before Monet. He also copied paintings in the Louvre and socialized with Delacroix, Courbet, Manet and Edgar Degas. In 1859, be moved to London, although he often returned to Paris. His flamboyant personality, dandified dress and quick-witted remarks attracted attention and he became friends with, among others, Oscar Wilde and Rossetti.

Although much of his art was received favourably, in 1878, he sued Ruskin and won after the English critic had accused him of‘flinging a pot of paint in the public’s face with this painting when it was exhibited at London’s Grosvenor Gallery in 1877.

Unfortunately, it was a pyrrhic victory: Whistler received damages of only a farthing (the least valuable coin of the realm), while the costs incurred bankrupted him.