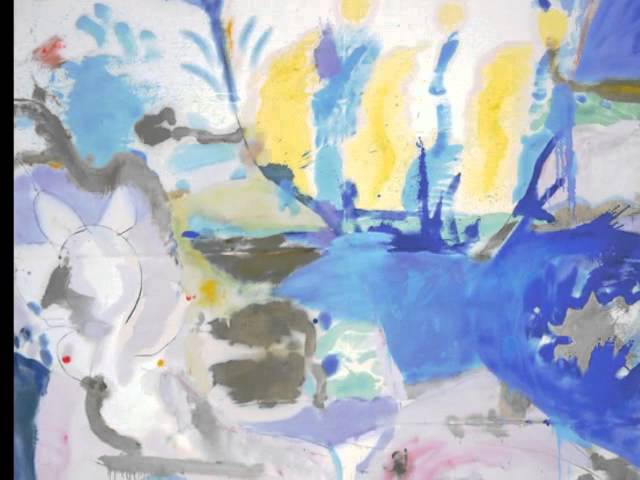 One of the most influential artists of the mid 20th century, Helen Frankenthaler (1928—2011) was an Abstract Expressionist painter with a free, distinctive style featuring luminous colour, large-scale canvases and heavily diluted oils or acrylics.

Influenced early on by artists including Pollock, Franz Kline and Robert Motherwell, she is classed as a Colour Field painter, a part of Abstract Expressionism. Her distinct approach, especially her soak-stain technique, was created by pouring turpentine-thinned paint onto canvas, producing clear washes of bright colour that appear to merge with the canvas and reject all suggestion of three-dimensional illusionism.

Mountains and Sea was the artwork in which, at the age of just twenty-three, she invented her method of painting that generated a new phase of Abstract Expressionism.

Always inspired by the landscape, in August 1952, Frankenthaler holidayed on Cape Breton Island in Nova Scotia, Canada. Working freely, she painted numerous small landscapes from direct observation in watercolours and oils on paper.

When she began this large work in October, her memories of the spectacular views of Nova Scotia and her studies of them remained paramount in her mind. Although influenced by Pollock’s drip method, Frankenthaler wanted to work differently. Unlike Pollock, who used enamel paint, she employed diluted oils and distinctive methods of application.

She pioneered her soak-stain techniques in this painting, working on the floor and using a variety of paint tools to manipulate her pools of pigment.

When the art critic Clement Greenberg brought the painters Morris Louis (1912-62) and Kenneth Noland (1924-2010) to her studio to sec the painting, they became enthused and experimented with the technique themselves, which led to further developments in Colour Field painting that had started with Mark Rothko (1903-70).

Louis later declared that Frankenthaler’s work was the ‘bridge between Pollock and what was possible’.