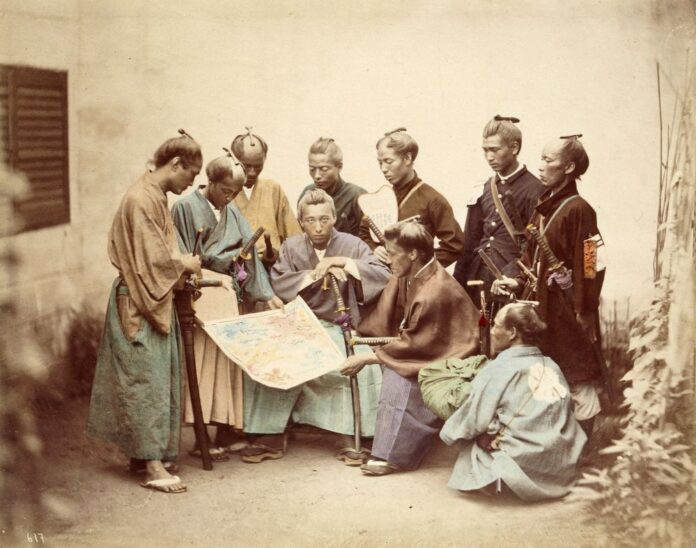 This photograph shows a group of samurai from the Satsuma clan. The men’s traditional chonmage haircuts and top knots are prominent in the image. The Satsuma samurai had a reputation for violence against foreigners. Felice Beato’s business partner—journalist and artist Charles Wirgman—escaped from a band of samurai besieging the British embassy in 1861.

Beato took this picture at a crucial moment in the transition of Japan’s leadership, during the Boshin War (1868-69)—a civil war between the ruling Tokugawa shogunate and those who wanted to restore imperial power under Emperor Meiji. The samurai of Satsuma played a significant role in the restoration of the emperor. Beato’s photograph marks the shift of Japan towards Western influence and signifies the compliance of a traditionally warlike group.

Beato and Wirgman’s photographic studio in Yokohama received many visitors. Wirgman wrote in The Illustrated London News: ‘My house is inundated with Japanese officers who come to see my sketches and my companion Signor Beato’s photographs.

They are extremely polite and bring presents of fruit, paper and fans. Tomorrow the present regiment leaves, and officers of the new one just arrived have already paid us a visit.

Born most probably in Corfu, Felice Beato trained in photographic techniques with his brother Antonio (c. 1825 – c. 1903), under photographer and engraver James Robertson (1813-88) in Constantinople, Turkey.

Beato photographed the Crimean War. His pictures of the Indian Rebellion in 1857 were the first to show corpses. In 1859 he documented the aftermath of the Siege of Lucknow.

He settled in Yokohama, Japan, in 1865 Beato set up a studio with Charles Wirgman, an artist and journalist for The Illustrated London News.

Beato published a two-volume photograph album, titled Native Types and Views of Japan. In 1869 he set up his own studio in Yokohama. He branched out into other businesses and m 1877 sold his stock to Austrian photographer Baron Raimund von Stillfried (1839-1911).

He went to China to cover the Second Opium War, he covered many military campaigns during his career.

The traditional dress of the samurai is worn by a number of the men and a more Western-style military uniform by others, showing the transition from traditional to more modern styles of dress as Japan began to modernize.

Beato worked as a war photographer on campaigns m Sudan and Burma then set up businesses in photography and curios in Burma.

The group are looking at the Western style map of Japan stretched out in the centre of the frame It is not only a visual marker of modernization but also explains to the Western viewer which part of East Asia the photograph is displaying it n probably a campaign map of the Boshin War.